Day two at La Vidalerie, it was all about sawing, sawing, and a bit more sawing!
We were set a challenge to design something to make from metal - which would have curves, straight bits, and could be made from a sheet of metal.


Before I continue, there is something you should know about me... I am a hopeless romantic!  Anything mushy, or sentimental, I just love it.  So, with this in mind, I decided to make a jigsaw piece pendant, actually, I decided to make 2, which fitted together... with my initials, my boyfriend's initials and the date we met stamped on them.


As with any type of metalwork project, it's best to practice with copper first (so much cheaper than silver!), so I have actually ended up with two pairs of jigsaw puzzle pieces!
I've had a bit of experience with with sawing before, but only sawing jump rings... I did know the basics like hold it lightly, don't push on the saw blade etc, but I've never sawn sheet metal.


So, this was the product of my first attempt... 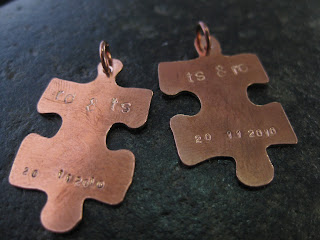 As much as I loved these, there were a few problems with them (hence why you always make a copper prototype!)... I didn't like the font I chose for the initials, I messed up the order of my number stamps, and ended having to use a 4-digit format for the year, when I only wanted it to be 2-digit, and finally, the orientation of the puzzle pieces was wrong!  yup, you guessed it, I'd drilled a hole in one of the pieces that fitted into the other, so they would never fit together nicely.  Lesson learned, I got on with making my silver versions: 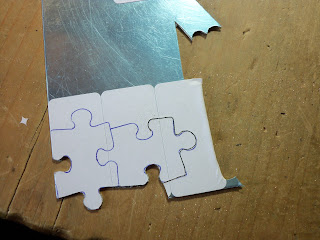 This shows how I cut it in a step-wise fashion... it's a good idea to start with the fiddly little bits, so in this case it was the cut out on the left hand side, and then the bottom part. 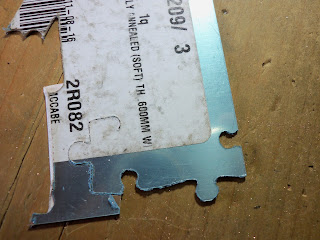 This shows the other side of the silver (complete with protective film and sticky label!) but it also shows where I started sawing next.  One thing to remember is that it is highly unlikely that you'll be able to cut out something like this in one go, and that you're probably going to have to take the blade out of the saw and move to a different starting point.  I did exactly that at this point as I couldn't go any further as the size of the silver sheet meant it wouldn't fit inside the saw frame for me to finish the inside of the curve.

Once I'd managed to get all the way round, all I had left to do was to cut along the join between the two puzzle pieces. 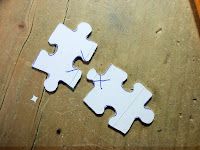 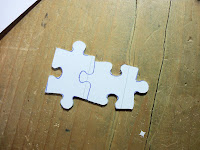 I made sure I marked where the two pieces join so there was no risk of me accidentally getting them the wrong way around again!  After removing the sticky labels and filing down the edges, it was time for the stamping and drilling. 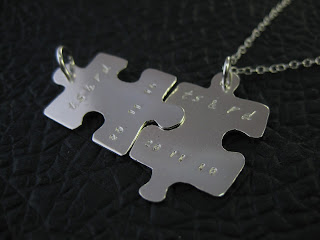 This goes to show that the pieces do actually fit together, and what they look like when they're all shiny!  The one with the chain on is currently around my neck, and has been admired by many people, including a waitress at a restaurant on Friday night.  The second puzzle piece is on a temporary chain for my darling... I'm going to be getting him a more manly chain for his birthday.  But he loves it, and has worn it every day so far! 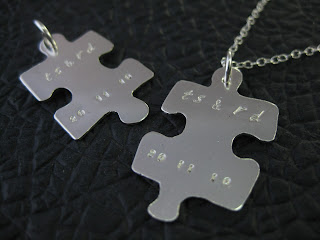 Oh, and he has NO excuse for forgetting our anniversary now!
Posted by Becs Dean-Skinner at 13:50