In October last year, I went to the Big Bead Show - nothing too unusual about that.  I had a lovely chat with Vicky Roberts, the new editor of Bead and Jewellery Magazine and she asked if I would be interested in designing something new and geometric for the magazine. Of course, I was interested!

I decided to re-imagine my spike-balls, to include some two-hole beads in them to make them easier to zip together, giving them a different look.

Here are my original spike balls... 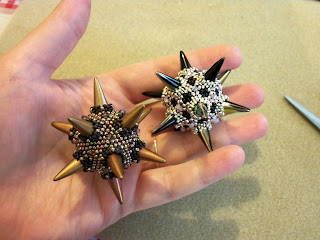 They are made from twelve spike beads, each set in a pentagon - making a dodecahedron. These spike balls are made entirely using 'traditional' seed beads, with crystal embellishments.  The tutorial for these spike balls is available in my Etsy shop.

When I initially designed these spike balls (back in 2012), two-hole beads weren't readily available, and I certainly hadn't considered designing with them. Now there are so many choices! I chose to use miniduos when re-imagining my spike-balls as they're the smallest of the two-hole beads, and they fit in nicely with the size of the beads I had used in the bezels. 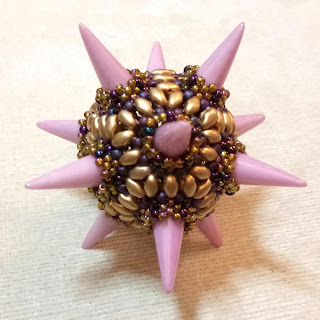 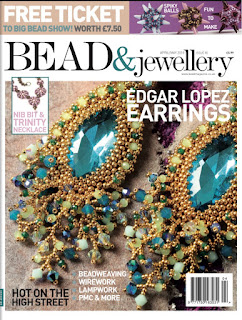 The second generation of spike balls are slightly larger than the first, and the way the miniduos interlock and form triangles at the corners makes them a slightly stronger structure. 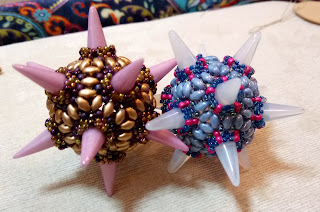 I love the way that beading is so versatile that you can re-engineer a design to accommodate new bead shapes and techniques.
Posted by Becs Dean-Skinner at 12:43